COAST was formed in the early 1980s out of a broad community interest to improve mass transportation options in southeastern New Hampshire. We are proud of how far our organization has come in 40 years, and we look forward to continued growth and expansion of our services in the years to come.

Seacoast New Hampshire had public transit services as far back as the late 19th century. Although trolleys are more typically associated with larger cities such as San Francisco, New Hampshire had them, too. Real trolleys (also known as streetcars or electric railways) existed for a few decades from the 1890s through the 1930s.

In the Seacoast, many of the electric railways converted to bus operation in the mid-1920s. Buses are much cheaper to operate and more flexible, and at the time were considered the next new and exciting technology.

Streetcar systems were privately owned, usually by a power company, a powerful local business owner, or the major railroad. As streetcars converted to buses, many of the routes and travel patterns stayed the same, as major development had typically occurred around the streetcar systems and lines.

In the decades between the Depression and the late 1970s, many of the bus lines changed ownership. By the late 1970s, there were a handful of private bus lines operating throughout the Seacoast NH region on routes and schedules that generally did not relate to one another. 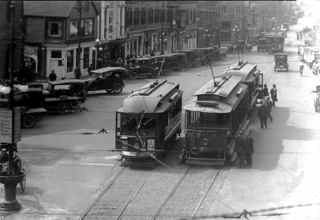 In 1981, a group of citizens, planners, government representatives and business owners representing the southeastern New Hampshire region began meeting to talk about regional transportation as a public service. They were known as the Strafford-Rockingham Transportation Task Force.

Originally, the idea was to gather many of the social-service providers together to coordinate the limited publicly-supported transportation options available in the region. However, this group quickly realized the need for a coordinated fixed-route bus system to form a backbone of public transportation services that the health and human-service related transportation network could supplement.

It was quickly determined that this should be done through a brokerage model. Under this model, COAST would serve as an umbrella organization, contracting with and coordinating a number of private bus operators and their routes into a cohesive public transportation network.

On March 12, 1981, the Task Force settled on a name for the new entity to perform this work, the Cooperative Alliance for Seacoast Transportation (COAST). The new entity was to work to bring together existing transportation providers, apply to receive Federal subsidies, and expand the remaining bus network for the greater good of the public in the region.

The group also decided to work with the University of New Hampshire to incorporate their "Kari-Van" bus system and have it become open to the public. On April 1, 1981 the New Hampshire Deputy Secretary of State, Robert P. Ambrose, officially recorded COAST as a new voluntary (nonprofit) corporation in the State of NH.

At the outset COAST provided no direct transit service itself, and had no staff. Instead, it contracted with Olde Yankee Transportation Management Company to manage the day-to-day activities of the fledgling organization, which primarily raised funds and established contracts with private bus operators in the area to run the bus routes.

Extended Route 7 to the Wentworth-Douglass Hospital.

Extended Route 7 to downtown Dover.
Added Route 7A: Dover-Rollinsford-South Berwick
Added Route 8: Portsmouth-Eliot-Kittery
By the 1990s, after Federal funding cuts had forced the elimination of some of the original routes in the 1988-1989 time frame, the primary contractor operating COAST bus services had become UNH Kari-Van. By this point, COAST had a total of 2 people on staff, and UNH Kari-van managed the daily bus operations and maintenance of the fleet.

COAST reinitiated Route 6 (Farmington-Rochester) and Route 7 (Exeter-Stratham-Portsmouth-Newington), once again making a public transit service connection between more rural parts of the region with the urbanized cities of Rochester, Dover, Somersworth and Portsmouth. Both of the new routes were managed and operated under contract by third parties. The mid-1990s was also when COAST first began operating a complementary ADA paratransit service for individuals with disabilities. 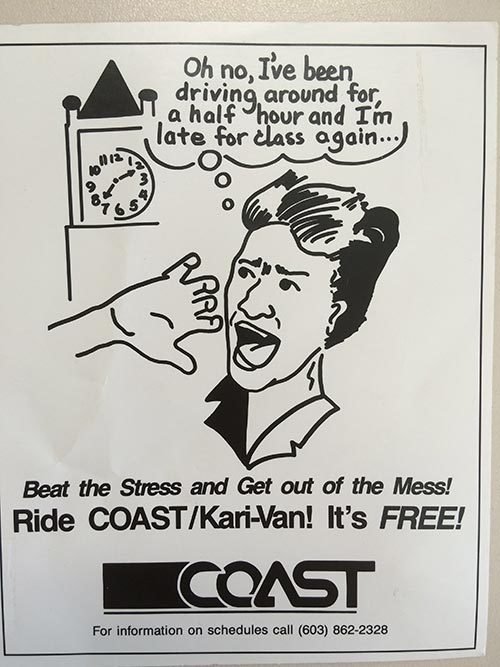 Although UNH had been tightly linked to the very existence of COAST as a public transit agency, differences between the missions of the University and COAST caused the organizations to split in 1998. At the time, the University was operating five regional routes (Routes 1-5) which comprised the bulk of COAST’s system, including a fledgling ADA paratransit service.

Despite the split between the organizations, COAST and UNH agreed to maintain a reciprocal fare agreement, and to keep Kari-Van's original three regional bus routes (Routes 3, 4 and 5) running and open to the public. COAST contracted with a new private company, Ryder/First Transit, to operate the other two routes that had been previously operated by the University (Routes 1 and 2).

After several years of struggling with the operation, COAST discontinued its contract with Ryder/First Transit in late 2001. On December 10th, 2001, COAST reorganized to become a primarily self-operated system, taking on the day-to-day management and operation of the bus routes and ADA paratransit services. COAST then re-hired most of the drivers who had worked for the private contractor only the night before. It was the start of a whole new era at COAST.

Meanwhile in 2000, COAST had reached an agreement to purchase the C&J Trailways facility in Dover, leasing back space and contracting with C&J to perform vehicle and facility maintenance on behalf of COAST. The site, located at 42 Sumner Drive site in Dover, was the first facility COAST had purchased to house its staff, fleet and operation.

Between 2000 and 2013, COAST experienced an incredible transformation as it grew in nearly all measures (staff, passenger trips, vehicle miles, etc.) by triple digit percentage points.

The new genesis of regional transportation efforts that eventually turn into the Alliance for Community Transportation (ACT) began.

A redesign of the year-round trolley routes in Portsmouth resulted in current Pease/Lafayette Trolley routes.

In 2007, COAST celebrated the 25th anniversary of providing public transit service to the Greater Seacoast Region.

Also in 2008, COAST and the City of Dover introduced the first phase of a three-phase "FastTrans" project.

In 2009, phases two and three of FastTrans were introduced. Dover enjoyed the highest level of public transit service of any community in New Hampshire.

In conjunction with the Alliance for Community Transportation (ACT), a new staff member came on board to take the lead in developing a regionally coordinated human-service transportation and public transportation system.

A new demand response service called the "North Bus" service was established in five communities north of Rochester that previously had no public transportation options.

At 506,514, COAST’s annual passenger trip total broke all previous records and represents a 138% increase in ridership from ten years prior.

COAST initiated the new Clipper Connection service, reintroducing a public transit option for employees at the Portsmouth Naval Shipyard for the first time since the mid-1980s.

Launched a major improvement in the frequency of Route 2 and the Trolley schedules as part of the mandated environmental mitigation measures for the Little Bay Bridge construction project.

A renewed focus on quality at every level (a top-notch maintenance program, a modernized bus fleet, and extensively trained operators) allowed the organization to grow to rapidly expand when the opportunity presented iteself.

After the organization's explosive growth between 2008 and 2013, and as one-time federal grants came and went, COAST made targeted adjustments to services between 2014 and 2020. The focus was to retain as much of the most successful services as possible, while discontinuing those that were less successful. As was experienced nationally, ridership leveled off and began to wane a small degree. 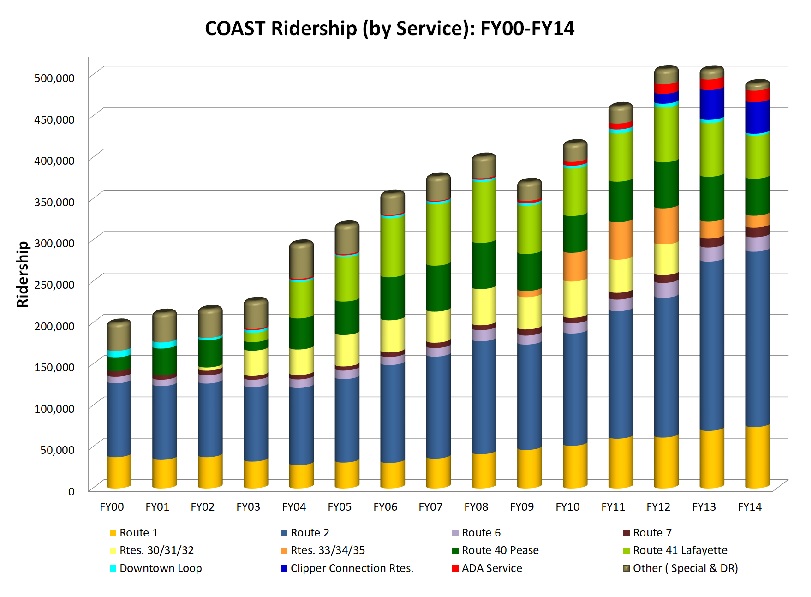 The commuteSMARTseacoast TMA was launched to encourage and promote commuting in the Greater Seacoast by means other than alone in a personal automobile.

COAST staff grew beyond the capacity of the facility and Administration, TMA, and Regional Coordination Staff moved down the street to leased space.

Buses and a minivan were purchased for area non-profit transportation providers through ACT.

After several years of explosive, and sometimes challenging, growth COAST began an extensive strategic planning effort to intentionally refocus efforts toward resetting the organization’s core guiding elements (foundation) to be ready to take advantage of future opportunities when they arose.

Route 7 transitioned from a fixed route to an advance reservation demand response-based service, operating four days a week between Exeter, Stratham, and Newmarket.

There are times in a public transit system’s life cycle, when a Comprehensive Operations Analysis (COA) must be conducted to take a fresh and clean look at the overall system. Through the COA COAST committed to taking a deep look at the entire system, retaining the strongest features of the network, while also stepping back to potentially discover new opportunities to better serve the region as it is today and into the foreseeable future.

There was a strong resurgence in ridership by the last half of 2019.

COAST celebrated the 15 millionth passenger trip in the early fall of 2019.

In March of 2020, a new virus known as COVID-19 swept across the world, stopped all ridership growth in its tracks and sent public transit reeling nationwide and worldwide. For the first time in its history COAST shut the entire fixed route system down for an extended period (nearly 1-1/2 months) between April 1, 2020 and May 10, 2020. As a smaller public transit operator with many riders for whom its services are critically essential, ridership did not dip as low, or for as long, as in larger metropolitan areas, however COAST experienced a nearly 45% drop in fixed route ridership from what it had experienced in late 2019 and early 2020. Because of the essential, life-critical need for the services provided by our ADA paratransit service, it continued operating while the fixed routes were suspended.

Fixed route services resumed after adequate personal protective equipment and cleaning supplies for the buses were secured. Services were resumed in two phases as not all staff were able to return at once. COAST also purchased and deployed new foggers, used by ambulance providers, for regularly sterilizing the interiors of the buses with a hydrogen-peroxide solution..

At the end of June 2020 COAST relaunched its new fixed route bus system in a very soft launch due to the ongoing COVID-19 pandemic.

In 2021 ridership on fixed route and demand response services began to slowly rebuild month-over-month, only fluctuating downward with spikes in COVID-19 cases in the region.

By mid-2021, after more than a year of assessment and analysis by CMA Engineers, COAST had an initial conceptual plan for a new facility to replace its aging, deficient, inaccessible, and insufficiently sized facility. The conceptual design cost was estimated at $14.7M, and the total building space was designed to be nearly 500% larger.

For 40 years, COAST has been focused on continual improvement, delivering the highest quality services possible, and sustaining an excellent work environment for our staff, all while operating in one of the few states in the nation that effectively has not historically supported public transportation operations.

COAST has experienced its most significant growth over the past 15 years. To better meet its current operational needs, be responsive to future demand and reduce its environmental impact, COAST is now focused on advancing design plans for construction a new facility on our current property in Dover. The project is an investment in both the regional economy and in climate action. The new facility will ensure that COAST will be a reliable and environmentally responsible resource for the people of the Greater Seacoast for the next 40 years and beyond. 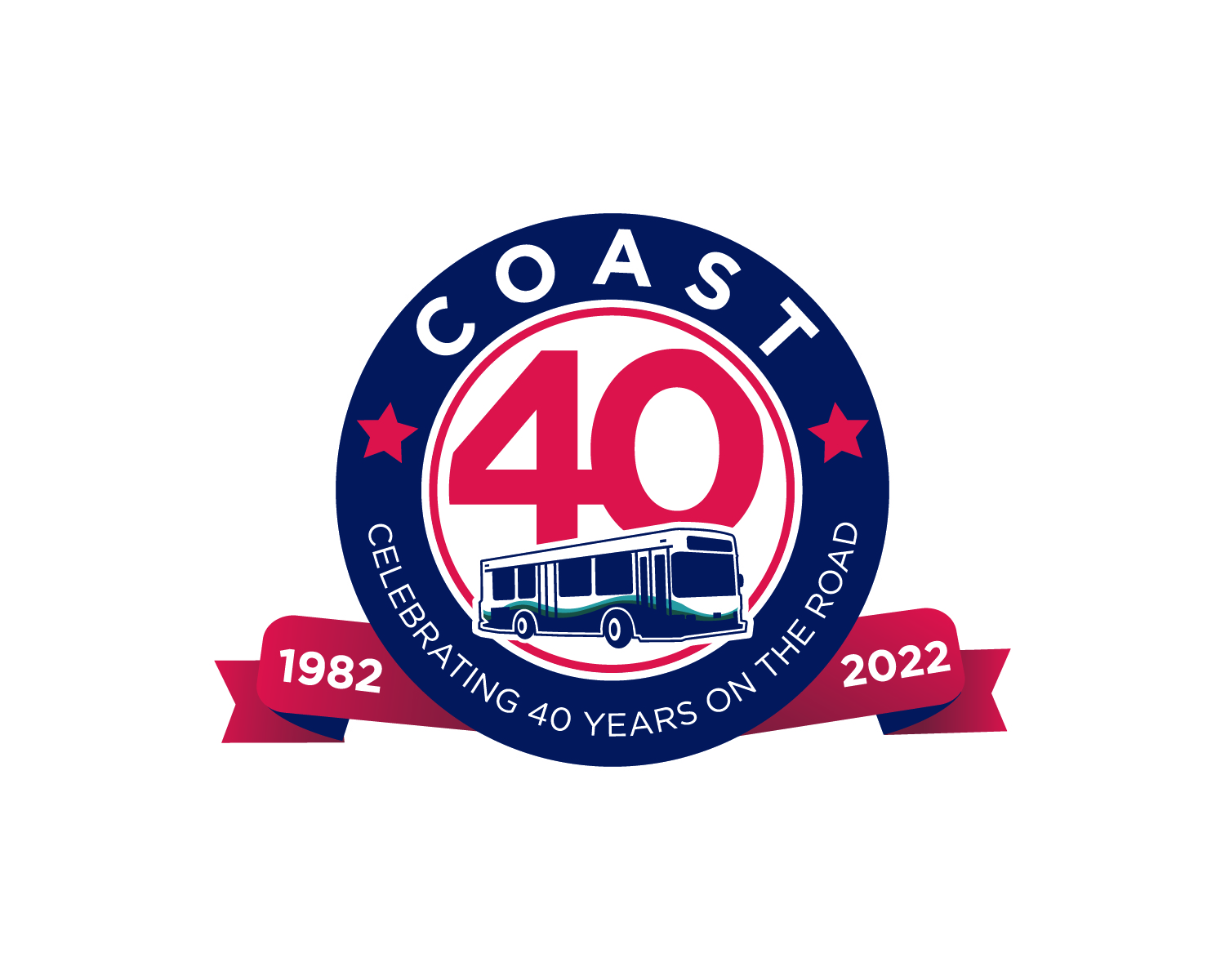