To open the menu for each route, click on that route number or name on the listing under “Schedules, Routes & Map.” This will open a new page that lists the stops for that route.

On the Route Page, there is a listing of the major (timed) stops along that route. To the right of each stop listed, there will be a series of times, each representing the specific time you can expect to catch a bus.

To scroll to times later in the day, click the arrow pointing right at the top right of the schedule. 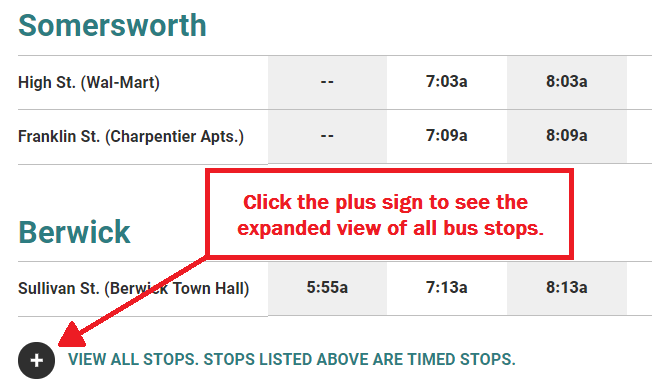 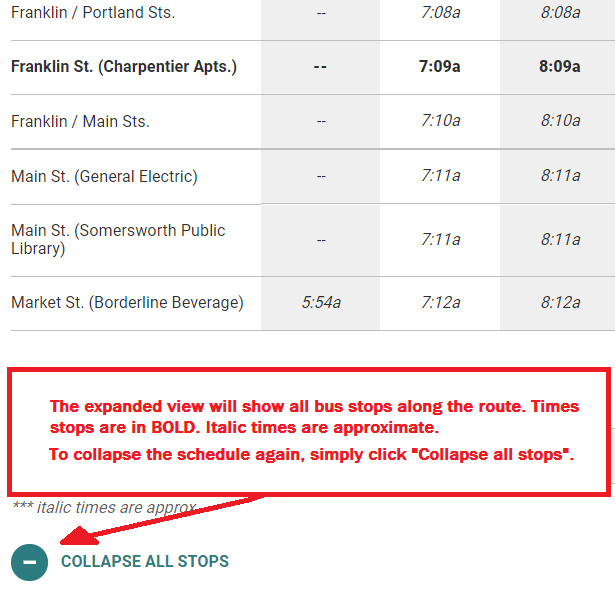 Each column of times represents a run of the bus traveling from the stop at the top of the schedule to the stop listed at the bottom. The bus passes by all stops along the way, except for stops listed as on-call, which generally are located just off the normal route.

Buses do not automatically stop at every stop. Usually they will only stop if there are riders waiting at the stop or if a stop request is signaled from onboard the bus. Departure times are not necessarily guaranteed, they are approximated based on average traffic conditions.

Some stops listed on the schedule will be listed as [On Call]. This means buses will not stop at these locations unless specifically requested. In order to request a bus at these locations, please contact COAST directly at 603-743-5777, Option 1.

The most important thing to remember is that schedules are approximate - you should always get to your stop a few minutes early so you don't miss your bus!

At the top right of the schedule page there is an option to Download the Route Schedule and view information on Fare Rates and Holidays Closures.

Scroll down each Route page to see any detailed notes that apply to that route, a Map of the Route, and some attractions located along the Route.

Sometimes, you'll need to take more than one bus to get where you're going.

First, figure out which route goes where you want to. Look at the Local and Regional Routes page to find the town you're headed to, and which routes serve it. If you're not sure which route serves your destination, you can either check each Route Page, or you can use the Trip Planner to get a full overview of the routes and buses that will take you to your location.

Once you know which routes you'll need to make your trip, the best way to start is with your destination - wherever you need to be, which bus arrives there in time? Then, you should work your way back to the first bus you have to take.

While connections are not guaranteed, we do time our system to make connections to all routes at a few main locations - the Lilac Mall, Dover Shaw's, Dover Transportation Center, Fox Run Mall, and Market Square.